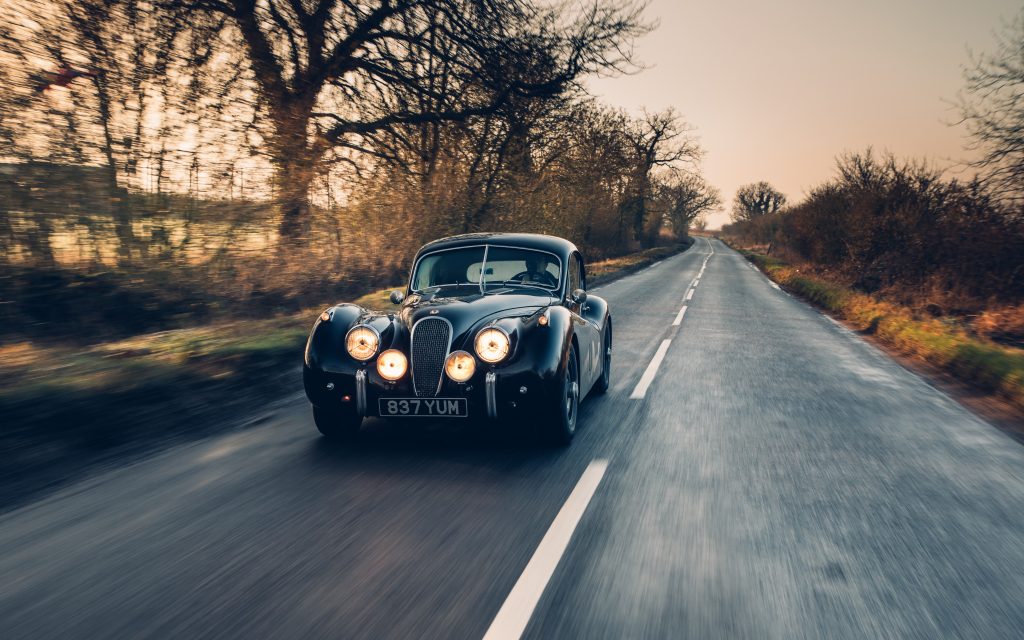 A classic Jaguar race car from the 1950s which has been given a modern ‘green’ twist will be taking centre stage at a special business event in Harrogate this month. (January 24)

Known as the “gentleman’s racer”, this 1953 Jaguar XK120 has been fully restored with one exception – its old petrol engine has been removed and replaced with a powerful and clean 100 per cent electric engine!

The car will be amongst a dozen other electric and hybrid vehicles being displayed – and driven – at Ethos Asset Finance’s Electric Vehicle Showcase Day, on January 24.

The event is being held at Harrogate’s Rudding Park, and will be of particular interest to businesses running company cars – from single vehicles to large fleets – looking to switch to environmentally-friendly models.

In addition to the classic Jaguar, Ethos has organised a selection of leading electric cars and vans to be available for test drive, from manufacturers including Tesla, Audi, Mercedes Benz, Porsche, Jaguar, BMW, Kia, Nissan, Volvo and LDV.

This event comes on the back of a highly-successful electric and hybrid car taster day Ethos staged only two months ago.

Rosie said: “We are thrilled to have the Jaguar XK120 with us on the day.

“Due to the success of November’s event, and the fact we have been bombarded with requests to hold another sooner rather than later, we have decided to bring it forward to this month.

“With the Government announcing that from April pure electric company vehicles with zero emissions will benefit from zero per cent tax, and no benefit in kind – together with low running maintenance costs – now is the time for businesses to look seriously at changing their vehicles to a greener solution.

“Attendees will be able to talk to the brand experts, a leading charging unit supplier and, of course, members of our team.”

Being held between 9am and 4pm in the Radcliffe Room, those wishing to attend are asked to register via rosie@ethosfinance.co.uk

Ethos Asset Finance, set up in Harrogate in 2007 by Chris Brown after 20 years in the banking industry, funds and sources assets for businesses across the UK.

It is recognised as one of the country’s leading finance providers to the chauffeur and private hire sectors. Information about the company can be found at www.ethosfinance.co.uk

Wayne Brazier
18:56 24 Mar 21
Have been a client of Kirsten & the team for many years with various chauffeur vehicle requirements. Have always acted... professionaly and promptly exceeding in service levels in delivering a quality solution for my business needs. In my experience, no other provider has ever come close to matching their ability to deliver on all counts. Highly recommended.read more

Steve Lynch
22:15 05 Mar 21
I've been promising this review for years now, sorry Kirsten (just figured out how to do it) I have used Kirsten at... Ethos for multiple brand new, and nearly new, top end Merc S Class and V Class for our Chauffeur Business. I have personally recommended them to several colleagues/partners/associates, who I know have worked with them and subsequently referred them on again with confidence. Chris (the boss) is also a great chap, very experienced, very well networked, and more importantly genuinely very helpful. Between them they are entrenched in our Chauffeur Industry. They have brought measurable value/savings to our business that I simply could not have created alone. They are our 'go to' company for not only financing expensive luxury cars, but also sourcing them!! If you want a reference/testimonial just reach out to me direct, happy to share genuine love for these guys. You must at least include them in your leg work when planning any purchase - good luck and Thank You Ethos - Kirsten and Chris and team...xread more

Chris Christodoulou
12:30 11 Feb 21
I’ve been on the Chauffer circuit for the past 3 years. Having asked many other In my industry regarding car finance... the name Ethos was mentioned 95% of the time. I called Ethos on Monday and was passed onto Kirsten, Kirsten put me at ease immediately as my credit history is not the best and told me she will be able to help me. Kirsten jumped through hoops to get me the Finance keeping me updated and even helping with certain paperwork that was needed at 7pm on a Wednesday. Come Friday midday I got the call from Kirsten that the finance had all gone through l, couldn’t of been more chuffed. She’s an asset to the company and I will recommend them all day long for their Professional Helpful guileful and mindful. Thanks you Ethos Chris Christo Londonread more

Vanessa Coyle
22:35 14 Jan 21
I used Ethos to arrange finance for a motor home purchase. Becky was extremely helpful and made the whole process very... easy.read more

Antony Mentessi
18:10 08 Jan 21
1st time I’ve used Ethos & I have to say I am very impressed, very professional, efficient, & a very personal touch to... it all as well, they have all my future business!read more

Muhammad Anzir
15:44 02 Oct 20
Ethos asset finance, the best company out there for funding options, they have been there for me since start of my... company and the service is absolutely outstanding. Kirsten has been very kind very helpful kept me updated throughout the process, found me the best deals and sourced me some absolutely fantastic fleet of vehicles. I couldn’t thank her enough she is very knowledgable and always supported me when needed. I will always use Ethos and i would highly recommend everyone to use this company. Thanks you all at Ethos Asset Finance especially Kirsten!!!read more

Lee Harker
12:02 17 Sep 20
Dealt with Kirsten at Ethos. Amazing service. Nothing to much trouble for her. Got me finance very quickly. Very human... to deal with and she's very funny but most of all professional. GOT THE JOB DONE. Highly Satisfied. Onward and upward.read more
Next Reviews
We use cookies on our website to give you the most relevant experience by remembering your preferences and repeat visits. By clicking “Accept”, you consent to the use of ALL the cookies.
Cookie settingsACCEPT
Privacy & Cookies Policy

Any cookies that may not be particularly necessary for the website to function and is used specifically to collect user personal data via analytics, ads, other embedded contents are termed as non-necessary cookies. It is mandatory to procure user consent prior to running these cookies on your website.